Byron Dragway is seeking a concession operator to take the reigns of the acclaimed Dragway Diner for the 2021 season.

Known for prestigious events like the World Power Wheel Standing Championships and for such distinctions as the “birthplace of big money bracket racing,” Byron Dragway patrons frequently note that the race track is also known for its quality dining.

Byron Dragway is an NHRA-sanctioned race track located 30-minutes southwest of Rockford in Byron, Illinois. A family owned and operated facility, Byron Dragway has established itself as a racer and fan friendly race track that is professionally operated with a personal touch. In fact, Byron Dragway was awarded NHRA North Central Region “Track of the Year” honors in 2019.

The Dragway Diner at Byron Dragway is a permanent concession building that operates virtually every Saturday & Sunday from April until mid-November. The Dragway Diner also operates on select weekdays during a handful of special event weekends.

Qualified concessionaires or restauranteurs can learn more by contacting Byron Dragway at info@byrondragway.com. 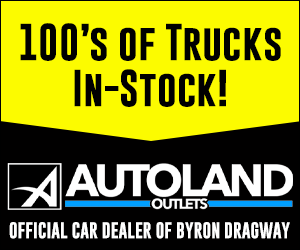